Little more than a year ago I posted an article entitled “Dutch scientists have weaponised bird flu — but why?”

And then, one week later, the research project was abruptly halted:

Scientists who created a potentially more deadly bird flu strain have temporarily stopped their research amid fears it could be used by terrorists.

In a letter published in Science and Nature, the teams call for an “international forum” to debate the risks and value of the studies.1

One of the concerns then being highlighted was the intention of the Erasmus Medical Center, the group behind the research, to make their findings public:

The National Science Advisory Board for Biosecurity (NSABB) recommended key details be omitted from publication of the research, which sparked international furore.

“I would have preferred if this hadn’t caused so much controversy, but it has happened and we can’t change that,” Ron Fouchier…

This is the abstract

The Nargun are returning

Watts Up With That?

On Sept. 23 the United Nations will host a party for world leaders in New York to pledge urgent action against climate change. Yet leaders from China, India and Germany have already announced that they won’t attend the summit and others are likely to follow, leaving President Obama looking a bit lonely. Could it be that they no longer regard it as an urgent threat that some time later in this century the air may get a bit warmer?

In effect, this is all that’s left of the global-warming emergency the U.N. declared in its first report on the subject in 1990. The U.N. no longer claims that there will be dangerous or rapid climate change in the next two decades…

There’s something in the water in Wales…

WHEN RHODRI Talfan Davies takes his leave as Director of BBC Wales in the years ahead, will he once again follow in his father’s footsteps?

It’s become the practice of departing Directors to take up one of the best paid part-time jobs in Wales — a directorship in Glas Cymru.

Glas Cymru owns Welsh Water and claims to be a “not-for-profit” business with customers as its “sole” concern.

But a forthcoming Rebecca Television investigation will claim consumers have been cheated of £100 million.

It’s the board of directors who really benefit.

When Geraint Talfan Davies left BBC Wales in 1999, he helped set up Glas Cymru — and soaked up more than £450,000 in fees in his decade with the company.

He was still there when his friend Menna Richards, who succeeded him as BBC Wales Director, was appointed to the Glas Cymru board in November 2010.

And its time we got angry about it.  They murdered our citizens with nuclear weapons on 9/11.  They murdered our guys in Bali with another nuclear weapon.  And now they are casually murdering Australians by knocking out airliners.  The first Malaysian Jet targeted was a stupid hit because the list of suspects was so short. But when you look at this first hit against Malaysian airlines you find that there were multiple motives for it.

Of course when I say “Jews” this is shorthand for all sorts of arch-nasty oligarchs.  But its a good enough shorthand.

Consider this analysis from elsewhere:

This ought to be no mystery when we look at the last Malaysian plane targeted.  With the last plane there is only one party that could make a plane disappear. That party being that NATO-based oligarchical/Jewish network that can control either the media, or the satellites … or both… 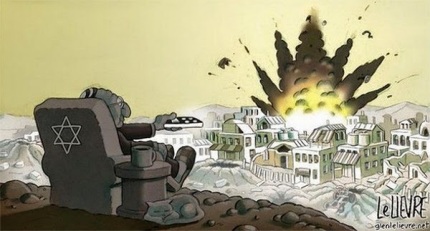 Australian Jewish groups had slammed the newspaper over Carlton’s July 26 column in which he accused the Zionist entity of “waging its own war of terror on the entire Gaza population”. The column was accompanied by a cartoon (shown above), which was widely condemned as “anti-Jew” by leaders of country’s organized Jewry which also threatened to take legal action against the newspaper under country’s “Hate Law”.

Initially, the newspaper defended the cartoon, explaining that Le Lievre’s drawing was inspired by “news photographs of Israeli Jews seated in chairs and lounges, observing the Israeli shelling of Gaza.”

But then, as expected, the Jewish Lobby invoked the “Six Million Died” smoking gun to demonize the newspaper. The Australian Jewish News wrote: “Not only were we treated to baseless accusations of…

This doesn’t make me sick at all [/sarc]

Watts Up With That?

NOTE: This op-ed is apparently too hot for some editors to handle. Late last week it was accepted and posted on politix.topix.com only to be abruptly removed some two hours later. After several hours of attempting to determine why it was removed, I was informed the topix.com editor had permanently taken it down because of a strong negative reaction to it and because of “conflicting views from the scientific community” over factual assertions in the piece.

Fortunately, some media outlets recognize a vigorous scientific debate persists over humanity’s influence on climate and those outlets refuse outside efforts to silence viewpoints that run counter to prevailing climate alarmism. My original piece follows below.- Craig Idso

The release of a United Nations (UN) climate change report last week energized various politicians and environmental activists, who issued a new round of calls to reduce greenhouse gas…